skip to main | skip to sidebar

Encounter with a strange auto driver !

Friday evening 7pm .....I had accompanied my sister in law(Vidya) and her husband(Kishor) who were out on a shopping spree @ our very own Commercial Streets. I did not have a tiring day at office hence I had some energy in me to walk around the busy streets of ComStreet! We walked into many shoes/dress/bag stores,fought with some shopkeepers on the huge prices they charged and bargained and finally had 3-4 heavy bags with us and were waiting to be chauffeur-driven by 'Baasha Bhai' a.k.a auto drivers to common man ;)

It was ~8pm and I guessed legally an auto driver shouldnt be charging "1 1/2 fare" but knowing our very own auto drivers I was almost expecting the demand fares to range from 60-80's. Normally it takes ~50Rs/- to reach my home. I walked few steps and saw some lazy auto drivers who were busy with their evening chats with their friends and smoked away happily,in between gave us 2-3 glances but still continued their gupshups with their friendly colleagues. 2-3 of the drivers standing @ the auto stand looked fiersome like as if they had just been freed from jail and were hungry for victims. I almost walked away from them when I suddenly spotted an autodriver who looked like he was in his teens,maybe 20's something and looked quite like this boy who is thrown out from school kinds.Felt pity for him and I started my usu style of bargaining - "Banaswadi....yeshttu?"...He happily said 70Rs.....I laughed and said -"Fifty inda start maadona?(lets start from 50 bucks)" . Somehow he reached "60/-" then I still insisted "50/-?" and walked off when he came behind me and said "Aayithu , 55/-" I thanked my stars for that moment coz one needs to be damn lucky to get an auto in Bengalooru and then we Vidya,Kishor and myself jumped into the auto with our shopping bags! 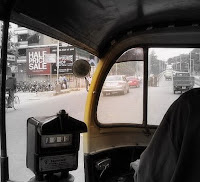 Watta an experience...my oh my!! he zzoooommmmed and sped so fast in that heavy traffic jam on Mosque Road.He took so many huge deviations for turning a simple right or a left or overtook many 'friendly' vehicles [I call them 'friendly' coz these vehicles followed the traffic lane principles and rode smoothly] and my auto driver zoomed past cab drivers too!! :-O...Can u believe that??? Overtaking a taxi/cab driver in Bengalooru needs some guts mannnn!!!! phew!!

Each time he escaped traffic signals and disobeyed the traffic lanes principles and zoomed across,my heart almost skipped a beat! We three passengers stared at each other and crossed our fingers almost hoping that we would reach home ALIVE!!

Before reaching my home ,there is a small lane which one needs to cross which consists of BAD roads with many potholes and pits and cowdungs and what not...Its actually feels terrible to ride on these roads before reaching my home sweet home !!But one cant expect anything less in Bengalooru roads:) ! And then started a small tiff!

My poor auto driver felt frustrated that he wasnt able to zoom on these 'junk' roads...he could get the smell of cowdung and s!#$% and so could we but we patiently complained nothing! Then he almost got pissed off and started spitting out and looked at us and said in his local language " You guys stay in this area....this bloody area....myy!! you made my auto come through these stupid roads" We three still remained silent....but he continued complaining!! Spat again once or twice outside and again looked behind and shouted - "Senseless ppl,what kind of area is this..Youu live hereee??.....damnnn!!" I spoke - "Look here Sir(one needs to give respect to these ppl sometimes only),you are not the first auto driver to have travelled on this lane" and I pointed at few more autos who had just crossed us and said -- " they too are travelling without any complaints and whats wrong with u" He stopped his 'possessed' vehicle...scrrrrrrreeeeccccchhhh!

"I am not driving any more further...come what may" said he and spat again outside. He was almost getting onto my nerves ,but I still spoke calmly and said "Look here our house is hardly 1-2km away and you can drop us there and I will show u another route to come out of this area".He started his engine :)...phew...I looked at my SIL and her hubby who looked almost puzzled and had a mixture of shock and amused type facial expression! His 'Mercedes' went just a further and again stopped....got out....spat twice or thrice(like as if I had dumped him into a pool of cowdung or S##%) and said -"Get out ppl,I am going no further". Enough was enough for me,firstly I have this special grudge against these autodrivers and somehow I was thrilled in showing my anger at this guy too! The three of us got down as he continued his usually spitting game and spoke some local slangs to himself .....I said with almost no patience - "Look here Mister I had promised u the fare which u said provided u brought us till the place we mentioned!I think its your duty to drop us at our desired place and not in the middle of a dark road(dark since that area had a power cut and it was pitch dark!)Mind u ,you are not the first auto driver in this world to travel on this kind of route....moreover is this the way you behave to a passenger??...I am going to give you 10/- less and nothing more" I somehow felt pride within for the simple feeling of having spoken such hugggeee dialogs in kannada ;) And then he again argued badly.....I continued again...I added - "Fine ...Kishor you give him the correct fare and I am noting down his auto number and make sure his license gets cancelled at the earliest for such a rude behavior" ...I said that and I almost felt my heart beating faster than before! Pin drop silence for 3 secs....he said in a loud voice - "Okiies.....fine ...reduce 10/- and give me my money and I will make sure the next time when you come to Commercial Street how to handle you ppl"..Dhamkiii.....I too responded harshly - "Fine fine....go and lets see what you will do at CommStreet anyways I have ur number noted down...huh!! " Kishor intervened in between now and spoke calmly,not knowing the local language said "Jaaoo bhaiyaa jaaooo...baad mein dekhenge..abhi tak kuch nahi bola...lekin start kiya thooo...."

The next moment I saw the angry autodriver ofcourse spitting out once again and take a turn and drove away in fulll speed into darkness! We three walked for another 10mins to reach our home and laughed and teased about how he spoke and spat and acted :D.....We walked back home ~9pm happily and excited to narrate this funny story to Vivek who at this time was almost worried waiting for us :)
Posted by Anu at 8:55 AM

I liked the narration of the story.
Dialogues were good :D ..
U can consider writing stories for the movies!!

And some poor souls drop you till home, show some gratitiude towards them! by giving them some food purchased outside :P

Thanks Richy :) will definitely consider what u said ;)

I could picturise this and you Kannada.. I am sure U r getting better at it !!

Biju has no comments ???

Et tu Anu?! Welcome welcome :)
Got the link from Richy's blog..
You write well n for the Baasha bai's you can complain in the numbers given http://rto.kar.nic.in/help.htm or can email the authorities at transcom@kar.nic.in. Guess u only forwarded me this info long time back ;)

@Poonam -> Dont question anything abt my kannada speaking skills okay u NRI :p

its good, u have not missed out even a single part of it...photographic memory...great!!! excellent narration too...

An Insight into my world of thoughts...

What happens to u after readin my posts?